Two hugely influential alternative rock bands in one night! Weezer and Pixies are teaming up this summer for an extensive co-headlining tour that will rock your socks off! Coming to Xfinity Center on Tuesday 17th July 2018, the bands will be playing a full set each, entertaining fans with hits from their incredible careers – don’t miss this unforgettable show! 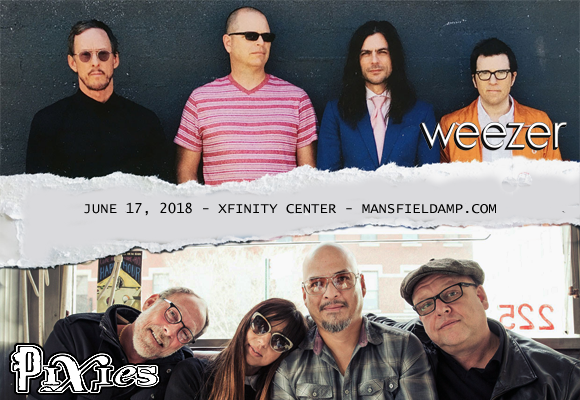 Formed in Los Angeles, California, in 1992, Weezer are an American rock band. The band’s self-titled debut album (now know as The Blue Album) was released in 1994, a year after the band signed to Geffen Records, eventually reaching triple-platinum sales. To date, Weezer has released ten studio albums, selling 9.2 million records in the US and over 17 million worldwide. They are best known for their anthemic singles “Buddy Holly”, “Undone – The Sweater Song”, “Hash Pipe”, Island In The Sun” and “Beverly Hills”.