It’s the hottest metal show of the year (and possibly of all time…) as the apocalyptic End of the World Tour comes to Xfinity Center on Sunday 22nd July, 2018! Featuring the mammoth line-up of Avenged Sevenfold, Prophets of Rage & Three Days Grace, expect utter carnage from this epic event!

“We’re proud to tour with PROPHETS OF RAGE and THREE DAYS GRACE this summer across America,” says AVENGED SEVENFOLD vocalist M. Shadows. “We see this tour as an opportunity to create an event with special bands and different generations of rock fans. From the moment you arrive at the venue until the last note is played, we’re hoping to give you the time of your life.”

“Awful pop dominating the airwaves? Political chaos across the land? Wanna fight back? Well the ‘End Of The World Tour’ is here,” says PROPHETS OF RAGE’s Tom Morello. “PROPHETS OF RAGE and AVENGED SEVENFOLD have always played absolutely uncompromising music. If you want your summer loud, raw and fearless we’ll see you in the pit.” 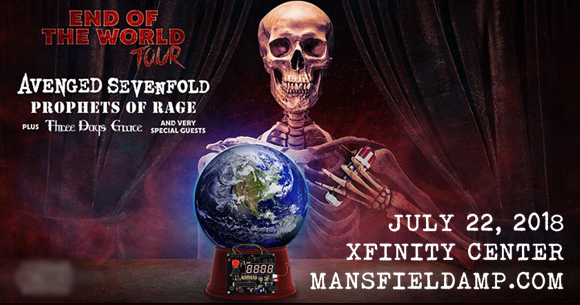 American heavy metal band Avenged Sevenfold formed in 1999 and currently consists of lead vocalist M. Shadows, rhythm guitarist and backing vocalist Zacky Vengeance, lead guitarist and backing vocalist Synyster Gates, bassist and backing vocalist Johnny Christ, and drummer Brooks Wackerman. Avenged Sevenfold are known for their diverse influences, spanning a myriad of styles (from metalcore through heavy metal, rock and prog metal) throughout their career. The band released their debut album, Sounding the Seventh Trumpet, in 2001 when they were in high school, but it was their first major label release, City of Evil (2005), that served as their mainstream breakthrough, debuting at No.30 on the Billboard 200 chart. Avenged Sevenfold have sold over 8 million albums worldwide and the band has released seven studio albums, one live album/DVD, two compilation albums and eighteen singles to date.