Few bands have the cultural legacy of Santana or Earth, Wind and Fire, and now the two Rock and Roll Hall of Fame inducted groups are heading out together on the Miraculous Supernatural Tour! With 19 Grammy Awards between them, the pioneering bands will no doubt create as show that's as magical as it sounds, and full of hits that were made for shaking your hips to, like "Smooth" and "September!" The tour comes to Xfinity Center on Wednesday 10th August 2022 (Rescheduled from Wednesday 11th August 2021)!

“It is a great joy and honor to co-share music with the magnificent elements of Earth, Wind & Fire. We look forward to delight, joy and ecstasy!”, says Santana. “I feel like a 20 year old on stage playing with my band, and they deliver incredible energy on every song. When we hit the stage, we know we will touch your heart and make you dance, sing, cry, laugh and leave your worries and fears behind. The shows will feature the hits of yesterday, today and tomorrow…with energy!” 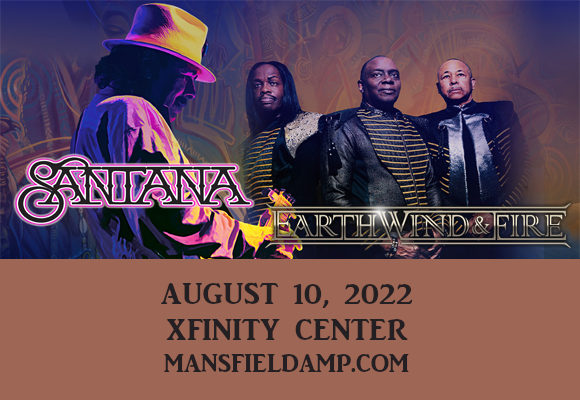 One of the world's best-selling groups of all time, Santana has sold over 100 million albums worldwide. Fronted by revolutionary virtuoso guitarist Carlos Santana, the band was formed in San Francisco in 1966 and became a global phenomenon after a game-changing performance at Woodstock Festival, where its fiery fusion of traditional Afro-Cuban rhythms and Latin sounds with rock and blues blew the crowd away and its performance became one of the most celebrated of the now legendary event. The band had huge success with its first three albums – Santana (1969), Abraxas (1970), and Santana III (1971) – and has released 25 albums to date, with 14 of them charting in the top 10 in the US. The group's most successful album is 1999's Supernatural, which hit number one in 11 countries and won the band nine Grammy Awards including Album of the Year and Best Rock Album, tying the record held by Michael Jackson for the most number of awards in a single night, as well as three Latin Grammy Awards, including Record of the Year. The band was inducted into the Rock and Roll Hall of Fame in 1998.