British heavy metal legend Ozzy Osbourne is saying farewell to life on the road and he’s coming to Xfinity Center on Thursday 6th September 2018 as part of his final tour! The legendary singer will be joined by the incredible Stone Sour as support for the stint, which will feature many of his classic hits:

“I haven’t really sat down and written it down, but of course I have to do ‘Paranoid’ and ‘Crazy Train,'” he says. “I want to do ‘Mama, I’m Coming Home’ and ‘No More Tears.’ I have a lot of songs to choose from. I was thinking about doing [Bark at the Moon’s] ‘Waiting for Darkness.’ That’s quite a good song to do. I’ve never done that onstage.” 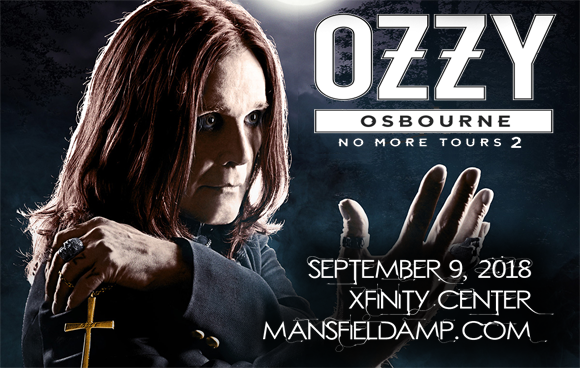 Ozzy Osbourne is known to many as the Godfather of Heavy Metal. Finding fame as frontman of British heavy metal band Black Sabbath from 1967 – 1979, Osbourne went on to have a successful solo career, releasing 11 studio albums after his departure from the band, the first seven of which went multi-platinum in the US. Combining both his Black Sabbath and solo releases, Osbourne has sold over 100 million albums worldwide, and Black Sabbath’s debut album is considered to be the first heavy metal album ever made. Osbourne was inducted into the Rock and Roll Hall of Fame as a member of Black Sabbath, and has been inducted into the UK Music Hall of Fame twice – once as part of the band and once as a solo artist. He received the Global Icon Award at the 2014 MTV Europe Music Awards, and was awarded the Ivor Novello Award for Lifetime Achievement from the British Academy of Songwriters, Composers and Authors in 2015.