Dominating the trap scene, Lil Baby is one of the world's biggest rappers right now, and he's bringing his Back Outside Tour to Xfinity Center on Wednesday 1st September 2021 with friend and collaborator Lil Durk as his special guest support act! This, of course, means that the two of them will be performing tracks from their chart-topping album Voices of the Heroes, including the title track itself! Fans will also get to hear all the hits from both of their mighty back catalogs as solo rappers! No dout it's gonna be one of the hottest hip-hop shows of the year! 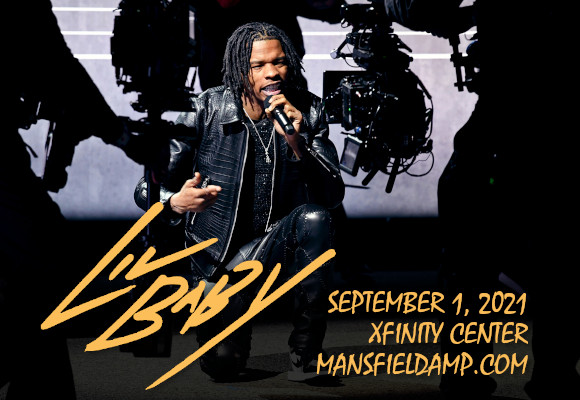 One of the most sought-after rappers in the trap scene right now, Lil Baby made his debut in 2015 with the mixtape Perfect Timing, which he dropped shortly after his release from prison, and which featured Young Thug and Lil Yachty, among others. The mixtape was an instant hit locally, but it was his 2017 mixtape that began his crossover into the mainstream, when his single "Freestyle" became a YouTube hit. The following year, he released his debut album, Harder Than Ever, which went straight to number three on the Billboard 200 and was certified platinum by the RIAA. It also launched the single "Yes Indeed" (with Drake), which peaked at six on the Billboard Hot 100. 2018 brought even more mainstream success, when he released two more mixtapes – Drip Harder and Street Gossip. In 2020, Lil Baby released his sophomore album, My Turn, which hit number one on the Billboard 200, was the most-steamed album of that year, and has been certified triple-platinum. It also launched two top-10 hit singles: "We Paid" (with 42 Dugg) and "The Bigger Picture", which peaked at number three on the Hot 100 – his highest-charting song as a lead artist. June 2021 brought the release of The Voice of the Heroes, which is a collaborative album with Lil Durk and also debuted at the top spot on the Billboard 200.