EVENT POSTPONED (date TBA). Hold on to your tickets! They will be valid for the new date once announced.

Brooks and Dunn are back! Taking the phrase "Winners never quit, and quitters never win" to heart, the iconic country duo have officially come out of semi-retirement to hit the road on a nationwide tour that comes to Xfinity Center on Saturday 27th June 2020! The chart-topping Grammy Award-winners have named the stint the Reboot Tour after their 2019 album, which featured re-recorded alternate versions of their hits, with a little help from a star-studded crew of contemporary country stars like Kacey Musgraves, Luke Combs, Thomas Rhett, Jon Pardi, Ashley McBryde and more! Rumor has it, the twosome will be bringing some "special guests" to the stage with them, so watch this space…! 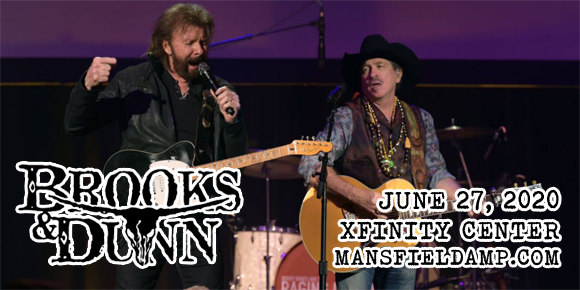 Country duo Brooks & Dunn (Kix Brooks and Ronnie Dunn) met at a Nashville music publishing company in 1990 and decided to leave their solo careers behind to create a new act. Combining country, honky tonk, rock and pop to create a new, energetic, entertaining sound, they took the country music scene by storm with their 1991 debut album Brand New Man. Throughout their career, the twosome have charted 50 hit singles, with 20 of them reaching number one on the Hot Country Songs chart, and a further 19 reaching the top 10. 10 of the duo's 12 studio albums have been rated platinum or higher by the RIAA, making them one of the most successful duos of all time. In addition to two Grammy Awards, they have won 17 Country Music Association awards and 26 Academy of Country Music awards over the course of their career, and in 2019 they were inducted into the Country Music Hall of Fame. Although the pair announced retirement in 2009, they reformed in 2015 and have been active ever since.