The ever popular Brooks and Dunn are back on the road, with a BRAND NEW record to boot, suitably titled Reboot! Get ready to catch their award winning Country tracks as they bring their much loved music to Xfinity Center on Thursday 16th June 2022 (Rescheduled from Thursday 9th September 2021)! Tickets are bound to sell fast for Brooks and Dunn, so secure yours while you still can – so that you can be a part of the crowd this September! 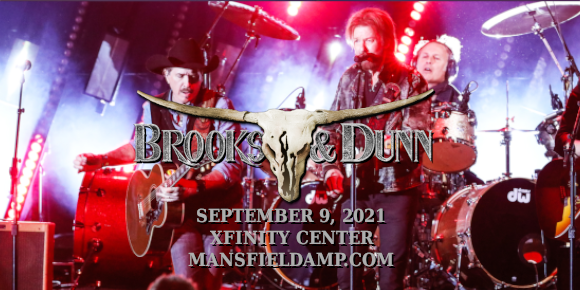 As one of Country's most exciting duos, Brooks & Dunn have taken over the music scene since they first hit the radio back in the 1980s. With their incredible single releases spanning over the last few decades, Kix Brooks and Ronnie Dunn have proven they have what it takes early on to go the long mile.

After making a sign to Arista Nashville in the early 1990s, Brooks & Dunn transformed from a local group to an international name, with now a whopping eleven studio albums to date, Brooks & Dunn have covered it all and gained a massive fan following where-ever they perform live to. Their incredible fifty single releases have taken to the charts continuously such as their number one hit "My Maria" and "Aint Nothing About You." As a firm favorite on the billboard charts, Brooks & Dunn have exceeded all expectations and have stayed at the top of the charts during the longevity of their career.

Along with their impressive collection of songs, Brooks and Dunn have gained nothing but positivity from music critics and their name has been pushed into the spotlight, gaining them countless of awards from Grammys and Country awards alike. The duo have rocketed with their success overall and are still none to be one of the most successful duos around, inside and outside of the Country genre.

As an established artist on the scene, fellow musicians have jumped at the chance of making a collaboration with Brooks & Dunn. Some of the top names include; Reba McEntire, Vince Gill, Sheryl Crow, Mac Powell, Billy Gibbons, and Jerry Jeff Walker – just to name a few.

Brooks & Dunn have formed an unforgettable legacy with their powerful releases, if you love their music then whatever you do, don't miss out as they head to Xfinity Center this Fall! The time is now to book those tickets…