Put your hands together for Matchbox Twenty & The Wallflowers as they come to Xfinity Center on Sunday 24th July 2022 (Rescheduled from Sunday 18th July 2021)! Rock band Matchbox Twenty have certainly made their mark on the music scene, with a wide range of releases, from record breaking albums to unforgettable singles, these guys have done it all! Come and experience Matchbox Twenty LIVE on their 2022 tour dates – this is one that cannot be missed! Tickets on sale NOW! 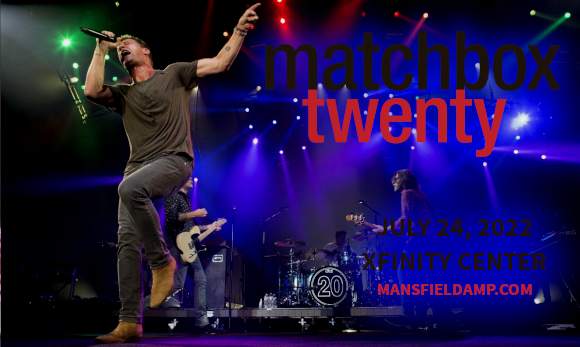 The American rockers Matchbox Twenty have given their fans an impeccable journey, from their career that has spanned over the last twenty five years. Throughout the last quarter of a century, they have released exciting albums, bringing their sounds to a larger fan base and becoming the International success we know of today.

The talented members; Rob Thomas (lead vocals, guitar, keyboards), Brian Yale (bass guitar), Paul Doucette (drums, rhythm guitar, backing vocals), and Kyle Cook (lead guitar, vocals) first started in Orlando, Florida, all the way back in the mid 1990's and were quick to record and release their debut album, Yourself or Someone Like You after just a year since they formed the band, with their release they topped the charts in the US, Australia, Canada and New Zealand and recieved a whopping twelve times platinum status. The band rose the bar and this mind blowing triumph, Matchbox Twenty have continued to take over the music scene, their second record Mad Season dropped in 2000 and once again hit the charts and gained them another incredible achievement of four times platinum in the US.

Matchbox Twenty have stayed right at the top of their game and their third album released in 2002, More Than You Think You Are certified two times platinum and was played across radio stations worldwide, once again their skills impressed their fans and gave plenty more material to listen to.

During the mid 2000's, Matchbox Twenty took a few years off from touring and releasing music but joined their forces back together in 2007 and gave yet another successful album to the world. With Exile on Mainstream, they gained gold certification and went on to tour songs from the release. Ever since they have kept up on their performance and toured extensively and with their most recent album North they topped the charts at number one!

Matchbox Twenty always give groundbreaking performances and iconic concert experiences – come and catch the band live as they hit the road once again in 2022 with The Wallflowers on support!