With their outstanding hits the Californian rockers – The Doobie Brothers have stayed at the top of their game all throughout their career. Now in 2022 they are bringing their much loved material to the live stages across North America and you can grab the chance to be a part of it! Join them along with support act Michael McDonald as they all take to the Xfinity Center on Saturday 25th June 2022 (Rescheduled from Thursday 12th August 2021)! Tickets are bound to sell fast for this one so be sure to book yours while you still can! 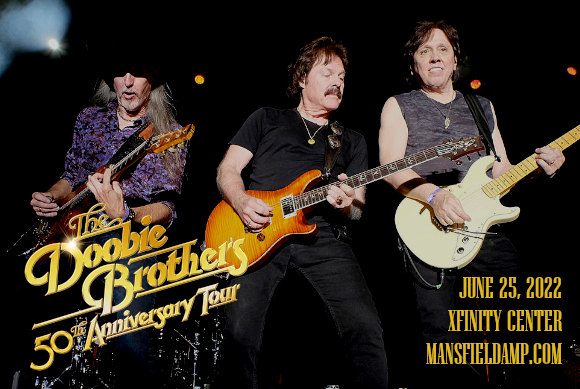 The American rockers The Doobie Brothers have showcased their ever growing talent from their very first debut all the way back in the 1970's. With their talented and huge line-up of; Tom Johnston (guitars, vocals) and Patrick Simmons (guitars, vocals), veteran member Michael McDonald (keyboards, vocals), longtime member John McFee (guitars, pedal steel, violin, backing vocals), and touring musicians including John Cowan (bass, vocals), Bill Payne (keyboards), Marc Russo (saxophones), Ed Toth (drums), and Marc Quiñones (percussion). Together they have stormed the world and have become an iconic group with over 40 million albums sold worldwide!

As a permanent fixture of the 1970's sound, The Doobie Brothers are known for their flawless work during that inspiring decade as they crossed over genre's from classic rock, rock n roll, folk, country and even R&B. But their music has developed and kept up with the times as they celebrated their 50th anniversary in 2019 and now are about to take to the road for another unstoppable tour for 2022.

This legendary band are a must-see for any music lover and with their extensive dates ahead of them – fans can grab the chance to catch them once again as they hit the stage and bring their biggest songs in a live concert performance! If you love The Doobie Brothers then there's no time to wait, grab those tickets and get prepared as this huge announcement has fans lining up to secure their seats!