The Black Crowes are coming to Xfinity Center on Wednesday 15th September 2021 (Rescheduled from Tuesday 20th July 2021)! Yes, you heard right, "The Most Rock 'n' Roll Rock 'n' Roll Band in the World" are back together and they're taking North America by storm on their Shake Your Money Maker Tour, celebrating the 30th anniversary of their seminal debut album and performing it in its entirety! This set of shows marks their first since 2013 and the Robinson brothers have reunited specially to showcase the album that introduced them to the masses! 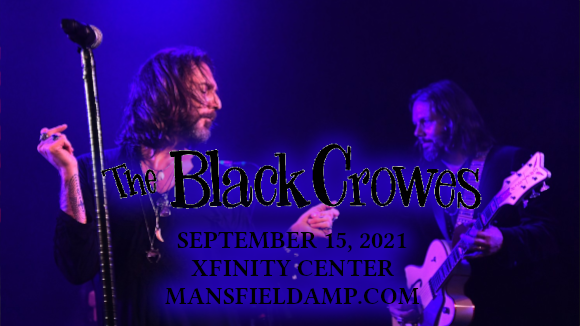 When they formed in 1984, The Black Crowes love of 1970s blues rock had become unfashionable, but by 1990, the band had become "The Most Rock 'n' Roll Rock 'n' Roll Band in the World" according to Melody Maker, and they were voted 'Best New American Band' by Rolling Stone. Their 1990 debut album, Shake Your Money Maker, peaked at number four on the Billboard 200, and two of its singles, "Hard to Handle" and "She Talks to Angels", hit the top spot on the Mainstream Rock Tracks chart. The band had even more success with their second studio album, 1992's The Southern Harmony and Musical Companion, which became a number one album on the Billboard 200. The band has released eight studio albums over the years, and has disbanded to get back together again twice, embarking on hiatus from 2002-2005 and from 2015-2019.