Grammy Award-winning husband-and-wife-led blues rock group the Tedeschi Trucks Band will be on the road with their Wheels of Soul 2018 Tour, pulling up at Xfinity Center on Sunday 8th July 2018 for a night of down-and-dirty blues music! The band will be joined for this “all-star triple bill” by the incredible Drive By Truckers and The Marcus King Band!

“We all draw from some of the same roots,” says Derek Trucks. “But we also share a different perspective than your typical southern rock bands do. I have a lot of respect and admiration for the Truckers’ songwriting. It’s an honest take on the world we live in.” 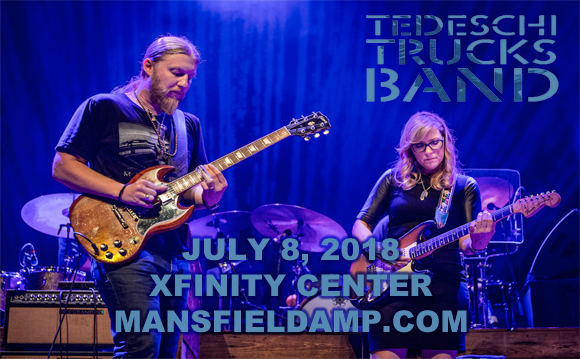 The Tedeschi Trucks Band are an American blues rock group led by married couple Derek Trucks and Susan Tedeschi and formed in 2010. Three years previous to the band’s formation, the couple had toured as Derek Trucks & Susan Tedeschi’s Soul Stew Revival with their respective groups, and the Tedschi Trucks Band was created as an amalgamation of the two. The band’s debut album, Revelator, was released in 2011 and won the 2012 Grammy Award for Best Blues Album. To date, the band has released three studio albums and two live albums.