Prepare to rock heavy and hard as two towering powerhouses of metal, Shinedown and Godsmack, come head-to-head in the double tour of the summer! Fans can expect exciting new offerings from both bands, who both have albums out this year, and no doubt they’ll play plenty of songs from their seminal years too! Catch them at Xfinity Center on Saturday August 25th 2018 – it’s gonna be HUGE! 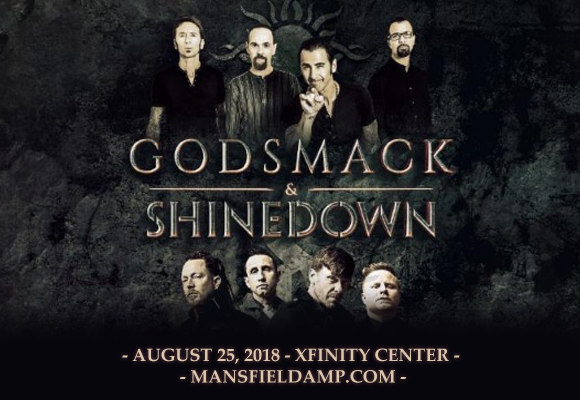 Formed in Lawrence, Massachusetts in 1995, American heavy metal band Godsmack consists of founder, frontman and songwriter Sully Erna, guitarist Tony Rombola, bassist Robbie Merrill, and drummer Shannon Larkin. Three years after forming, the band released its self-titled debut on Universal Records. The album did well, entering at number 22 on the Billboard 200, and by 2001 it was certified quadruple-platinum. To date, Godsmack has released six studio albums, one EP , four DVDs, one compilation album and one live album, including three consecutive number-one albums on the Billboard 200 chart: Faceless (2003), IV (2006), and The Oracle (2010). The band’s seventh studio album will be titled When Legends Rise, and is slated for a 2018 release.