Non-stop platinum-selling rock anthems are headed your way as Sammy Hagar and the Circle & Whitesnake bring their massive double headliner tour to Xfinity Center on Saturday 22nd August 2020! Two unbelieveably big acts in their own right, these two rock behemouths will be taking a full set each, thrilling fans with all their biggest and best hits! Not only do they have years of classic tunes to pick from, but both bands released new albums last year (Sammy Hagar and the Circle's Space Between, and Whitesnake's Fleash & Blood), so there'll be loads of songs heard for the first time live! Special guest support act Night Ranger will be opening the show! 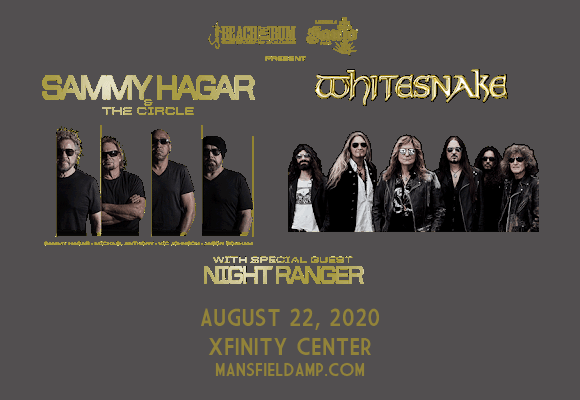 Sammy Hagar (lead vocals, guitars), Michael Anthony (bass guitar, vocals), John Bonham (drums, percussion, vocals) and Vic Johnson (lead guitar) make up the rock supergroup Sammy Hagar and the Circle. The band is led by Hagar, also known as the Red Rocker, who originally began his career in the 1970s with the hard rock band Montrose, and embarked upon a solo career, before fronting Van Halen from 1985-1996. Anthony also performed with Van Halen, playing bass for the band from 1984 – 2006. Bonham is the son of the late, great Led Zeppelin drummer John Bonham and has kept his father's legacy alive with the toruing experience Jason Bonham's Led Zeppelin Evening. Lead guitarist Johnson began his career with The BusBoys, and was part of the band Sammy Hagar & The Waboritas from 1996–2005. Together, they perform a vast repertoire of hits from their individual and collective careers, and in 2019, they released a debut album of original songs – Space Between – which debuted at number four on the Billboard 200, and number one on Billboard's Top Album Sales, Independent Albums and Top Rock Albums charts.