Buckle up and lock in this date as Sammy Hagar, and supergroup The Circle will drive by to shake things up and give this side of town a taste of "Crazy Times". The Red Rocker will set the Xfinity Center stage ablaze on Monday 13th June 2022, along with blues rockers George Thorogood & the Destroyers, as special guests. Sammy Hagar will take his fans on a wild music trip as he covers hits from his MONTROSE era, his solo career, his illustrious stint with VAN HALEN, and beyond. Fans are ardently anticipating an awesome setlist that would most likely contain the colossal rock anthems that defined the glam-blues-rock era: "I Can't Drive 55", "Right Now", "There's Only One Way To Rock", "Mas Tequila", "Why Can't This Be Love", "Heavy Metal", "Your Love is Driving Me Crazy" and many more. Be part of this amazing circle of rock metal fans who are in for crazy times ahead. Check out our ticketing site and book your tickets now! 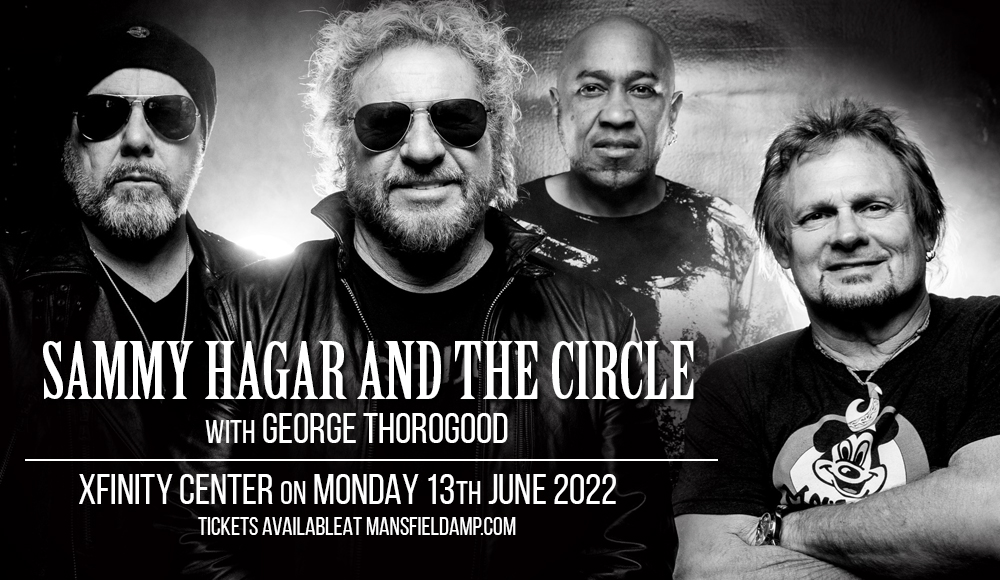 Sammy Hagar burst onto the music scene in San Francisco in the 1970s with the band Montrose, before clinching the lead vocalist slot in Van Halen in 1985. He was no newbie who was in it for the ride. Hagar has established a rock-solid reputation with eight solo albums, several of which were certified platinum, and he is a veteran performer and crowd drawer who's had sold-out shows across America. As a member of Van Halen, Hagar propelled them to more extensive heights of success with four No. 1 albums in a row. Hagar was also part of Van Halen's induction into the Rock and Roll Hall of Fame.

Beyond Van Halen, Sammy Hagar blazed more rock and roll trails as he teamed up with The Circle. This supergroup boasts of rock's big guns which include fellow VAN HALEN alum and Rock Hall inductee Michael Anthony; Grammy Award-winning drummer Jason Bonham; and Vic Johnson, Hagar's longtime guitar virtuoso. Sammy Hagar and The Circle released their debut studio album, "Space Between" on May 10, 2020, living proof of their super collaborative energies that produced "an album that builds and explodes, song after song, around the concepts of money, greed, enlightenment, and truth."

Now what can you expect from this Red Rocker? Crazy great massive hits which include : "I Can't Drive 55", "Right Now", "There's Only One Way To Rock", "Mas Tequila", "Why Can't This Be Love", "Heavy Metal", "Your Love is Driving Me Crazy" and many more.

Hagar himself is stoked to be playing live once again. “A tour this size has been a long time coming and it’s definitely going to be worth the wait. The Circle and I are super excited and ready to throw the party of the year with George Thorogood…We’re going to take the music and party to a whole new level— ‘Crazy Times’ is an understatement.” Don't miss it! Book your tickets now!