Just when you thought the country line-up for this summer at Xfinity Center couldn't get any better, chart-topping artist Sam Hunt announces that he's headed to the renowned venue on Saturday 18th July 2020 as part of his Southside Tour! The tour co-incides with the launch of his sophomore album Sotuhside, which has been six years in the making, following the enormous success of his debut, Montevallo! The album has launched a string of hits already, including his 2017 fan favorite, "Body Like a Back Road!" Not only will fans get to see a scorching country set from hunt, but fellow country artists Kip Moore and Travis Dennings will be in support, as well as Brandi Cyrus with a DJ set – it's gonna be a heluva party! 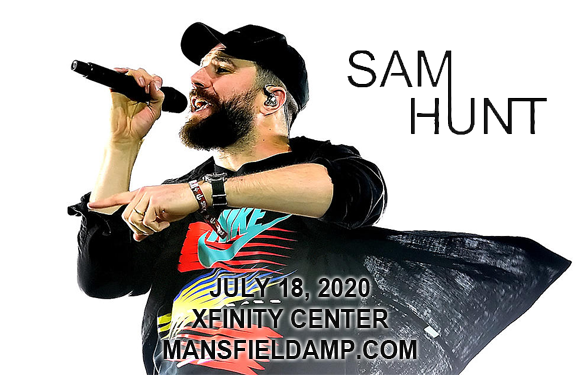 When it comes to country music, there's no-one out there quite like Sam Hunt! The performer has consistently taken his own unique path to stardom, whether it be with a drastic change in career direction from professional football-player to musician, or with his R&B and hip hop inflections that make his music sound like no-one else on the scene! Although his decision to make the move to Nashville in 2008 came as some surprise to friends and family, the artist soon made waves as a songwriter, landing himself co-writing gigs with artists as renowned as Kenny Chesney, Keith Urban, Billy Currington, and Reba McEntire. Then came Montevallo, his debut album, in 2014, which put him firmly on the map as an artist in his own right, producing five record-breaking singles – “Leave the Night On,” “Take Your Time,” “House Party,” “Break Up in a Small Town” and “Make You Miss Me”. 2020 brings his long-awaited full-length follow-up to Montevallo: Southside.