A rock star with matchless talent, Rod Stewart comes to Xfinity Center on Friday 12th August 2022 (Rescheduled from Friday 30th July 2021)! The singer and songwriter, whose unique voice and lyrical prowess have seen him traverse an enduring five decade career, will perform in support of his latest album, You’re In My Heart: Rod Stewart With The Royal Philharmonic Orchestra, which couples the myriad hits he has had over the years with lush orchestral backing to create something truly special! The veteran performer will not only perform a full set of hits, but fellow Rock and Roll Hall of Fame inductees Cheap Trick will be opening for him! 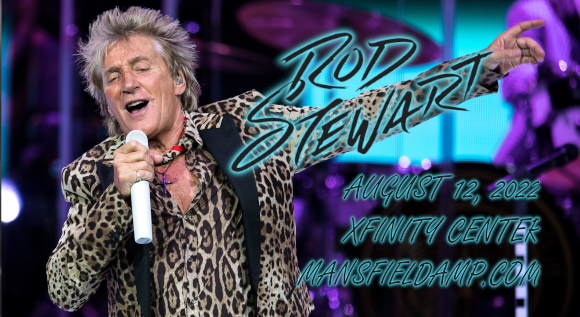 One of the world's best-selling music artists of all time, British singer and songwriter Rod Stewart has sold over 120 million albums worldwide throughout his five decade career, and has found success both as a solo artist, and as the frontman of rock bands The Jeff Beck Group and The Faces. From the early-1960s to today, Stewart has consistently found success both in his native Britain and in the US, as well as around the world. In the UK, he has charted nine number one albums on the UK Albums Chart and has had an incredible 62 UK hit singles, including 31 top 10 hits and six number ones, and in the US, Stewart has charted 16 top 10 singles, including four Billboard Hot 100 number ones. Not only has he been knighted for his contributions to music and charity, but he also holds a Grammy Award, a Brit Award for Outstanding Contribution to Music, and has been inducted into the Rock and Roll Hall of Fame twice (once as a solo artist, in 1994, and as a member of the Faces in 2012), as well as the UK Music Hall of Fame.