Hitting the road this summer to promote his upcoming album, Beerbongs and Bentleys, Post Malone is coming to Xfinity Center on Thursday 24th May 2018! The world-dominating hip hop artist will be joined on the stint by Atlanta rapper and “Rockstar” collaborator 21 Savage, who will also be performing a set, plus there’ll be support from West Coast collective SOB x RBE, comprised of Slimmy B, DaBoii, Lul G, and Yhung T.O.! Too dope! 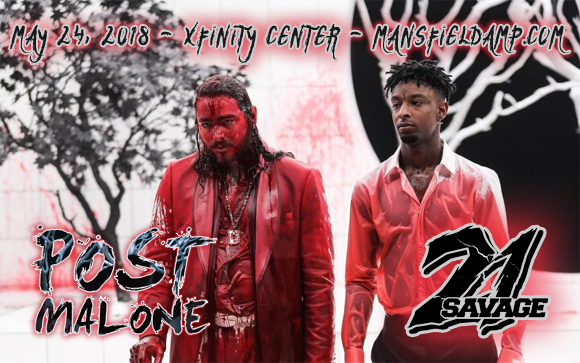 American singer, rapper, songwriter, and record producer Post Malone burst onto the hip hop scene in August 2015 with the release of his debut single “White Iversion”. Signing to Republic Records that same month, Malone released his debut studio album Stoney in December 2016, launching the single “Congratulations”, which peaked at number eight on the Billboard Hot 100. In September 2017, Malone released his first number one single, “Rockstar”, featuring 21 Savage, which stayed at the top spot on the Billboard Hot 100 for eight consecutive weeks. “Rockstar” is the first single from Malone’s upcoming studio album Beerbongs and Bentleys, which will be released in 2018.