'Lately, I've been, I've been losing sleep, dreaming about the things that we could be' – the time has come to stop dreaming and finally scream and chant this line that took the world by storm live on stage as OneRepublic makes their live show comeback on the Never Ending Summer Tour with special guest, NEEDTOBREATHE. Hop on the Never Ending Summer Tour at Xfinity Center on Tuesday, 19th of July 2022. OneRepublic just released their brand new single "West Coast" – an ode to chasing new beginnings. Catch the band behind some of the world's biggest hit singles including "Good Life", "If I Lose Myself", "Counting Stars", and "Apologize" perform their hits and new tracks off of their latest album "Human" live on stage as 2022 marks live music's return to venues across the country. Book your tickets now! 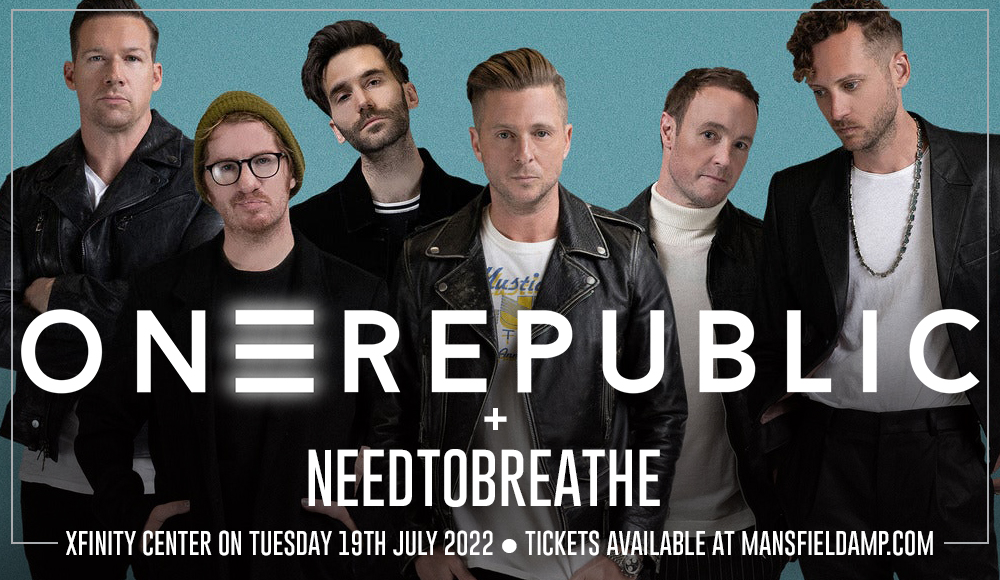 As OneRepublic takes on the 'west coast, singing "Yeah, they got sun in LA and some shinin’ stars”, brighter days are definitely ahead as they make a big tour comeback on the Never Ending Summer Tour.

The 'never-ending journey of 'counting stars of hits and success traces back to 1996 when lead vocalist Ryan Tedder and lead guitarist Zach Filkins were on a drive home, discussing their favorite musicians, and agreeing to form a band, naming it "This Beautiful Mess", eventually playing a few intimate gigs leading to having to part ways as they entered college.

By 2002, the duo met again and formed a new band with the name "Republic" which was later on changed to "OneRepublic", and signing with Columbia. Just two months before the release of their debut album, Columbia dropped the band. Though a rough start, "Apologize" was making rounds in MySpace, topping the site's charts. Tedder praises MySpace for keeping the band together.

Their debut album "Dreaming Out Loud" was released in 2007 under their new label, Timbaland's Mosley Music Group. Its lead single, "Apologize", was rearranged by the acclaimed producer, Timbaland, leading the single to become a major worldwide hit, peaking at #1 across the globe.

From then on, OneRepublic dropped their succeeding records, "Waking Up", "Native", "Oh My My", and "Human", amassing several hit singles including "All the Right Moves", "Secrets", "Good Life", "Something I Need", "Rescue Me", and the RIAA Diamond-awarded "Counting Stars".

From a 'beautiful mess, OneRepublic has remained beautiful and authentic to its impact of touching lives around the world through their music. As they embark on the Never Ending Summer Tour, the band will continue to count stars of joy, music, and fans in this new and bright era.

Don't miss out on a captivating night of your favorite OneRepublic hits and new music off of their latest album "Human" live on stage. Book your tickets now!