Country megastar Luke Bryan continues to be at the top of his game and 2017 sees him on tour again, coming to Xfinity Center on Saturday 24th June 2017! With the phenomenal Brett Eldredge in tow, Bryan will be hitting the Xfinity stage for one of the wildest, most exciting country shows you’ll ever see – don’t miss this awesome performer doing what he does best! 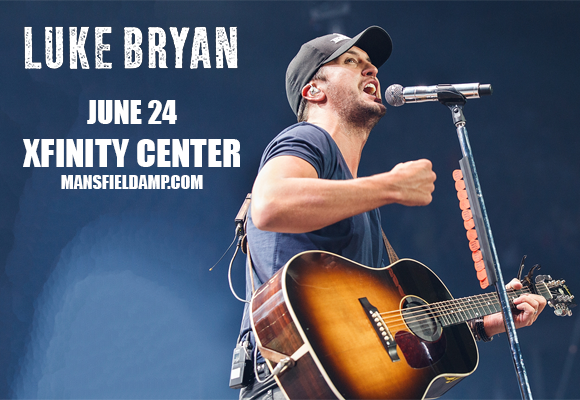 Country star Luke Bryan began his music career behind the scenes, writing for artists like Travis Tritt and Billy Currington. His breakthrough debut album I’ll Stay Me was released in 2007, and Bryan shot to stardom as a country star in his own right, earning numerous awards including: Top New Solo Vocalist and Top New Artist at the Academy of Country Music Awards, USA Weekend Breakthrough Video of the Year (for “Do I”) at the CMT Music Awards, and New Artist of the Year at the Country Music Association Awards. Since then, Bryan has continued to top the charts, finding similar success with his subsequent releases, and receiving the Academy of Country Music Awards & Country Music Association Awards “Entertainer of the Year” award.