There’s no stopping country sensations Lady Antebellum! The “Need You Now” hit-makers are back on the road after a year-long hiatus, ready for a triumphant return to the stage! Embarking on the You Look Good Tour, alongside Grammy-nominated country-pop singer Kelsea Ballerini and fresh face on the scene Brett Young! The tour is in support of the trio’s highly anticipated new album Heart Break! Catch them at Xfinity Center on Saturday 12th August 2017!

“We knew right away that we had to name this album after a track that is a play on the word ‘heartbreak,’” said Hillary Scott in a prepared statement. “It’s all about those personal growths everyone goes through, and it was liberating to get back in the studio with Charles and Dave to intertwine those feelings into the recording process. I feel like we’ve reemerged stronger than ever, and I can’t wait to share more music!” 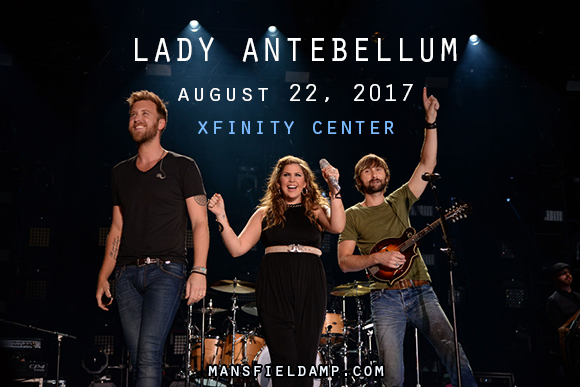 Formed in Nashville, Tennessee in 2006, Lady Antebellum are Hillary Scott (lead vocals), Charles Kelley (lead vocals) and Dave Haywood (background vocals, guitar, piano, mandolin). A country music trio, they signed to Capitol Nashville in 2007 and gained attention the same year for their appearance on Jim Brickman’s single “Never Alone”. The band released their platinum-certified, Grammy Award-nominated debut album was released in 2008, and the band has grown in popularity ever since, topping the charts with hits like “I Run To You” “American Honey” “Looking For A Good Time” “Hello World” and “Need You Now”, which won 5 Grammy Awards, including Song of the Year and Record of the Year.