Two of the biggest bands in alt-metal – Korn and Faith No More – have joined forces to bring an almighty co-headlining tour to Xfinity Center on Tuesday 1st September 2020 that will blow your minds! Between them, the two groups have been responsible for some of the biggers bangers of the nu-metal era, and fans will have the chance to rock out to all the classics as these truly epic acts take to the stage! Korn will no doubt play some tunes from their 2019 album, The Nothing, and there'll no doubt be some surprises in store for Faith No More fans, who haven't had the chance to see the band live in five years! They'll be joined by some mighty supports acts in the form of Helmet and '68! 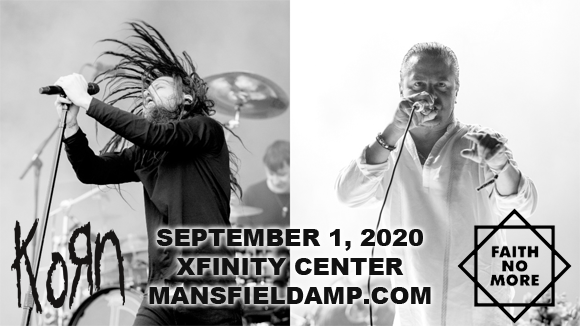 In 1993, three former members of the funk metal band L.A.P.D. began a new musical project – Korn. Today, the band is known for being one of the pioneering groups behind the nu-metal movement and is formed of founding members Jonathan Davis (vocals, bagpipes), James "Munky" Shaffer (guitar), Brian "Head" Welch (guitar, backing vocals), and Reginald "Fieldy" Arvizu (bass), as well as Ray Luzier (drums), who replaced the band's original drummer and founding member, David Silveria in 2007. Korn (1994) and Life Is Peachy (1996), the band's first two albums, were moderately successful and have since been certified double-platinum, but it was the group's 1998 album, Follow the Leader, that was its breakthrough hit. The album hit the top spot on the Billboard 200 and was followed by 1999's Issues, which did the same. The group's willingness to mix genres such as funk, metal, hip hop and grunge, and to metaphorically exorcise their demons through their lyrics, set them apart from other bands of the time and gained them a large following, inspiring many subsequent metal acts. Since its inception, Korn has released seven consecutive albums that are certified platinum or higher, and 12 of the band's albums have charted within the top 10 of the Billboard 200, with eight of them reaching the top five. It has also been honored with two Grammy Awards from eight nominations, two MTV Video Music Awards out of 11 nominations, among other awards and accolades. The Nothing, the band's latest album, was released in 2019.