A band that needs no introduction, Kiss comes to Xfinity Center on Wednesday 18th August 2021 on their End of the Road Farewell Tour! Expect nothing but the best from these master performers as they prepare to go out with a bang…

“All that we have built and all that we have conquered over the past four decades could never have happened without the millions of people worldwide who’ve filled clubs, arenas and stadiums over those years,” Kiss said in a statement.

“This will be the ultimate celebration for those who’ve seen us and a last chance for those who haven’t. KISS Army, we’re saying goodbye on our final tour with our biggest show yet and we’ll go out the same way we came in… Unapologetic and Unstoppable.” 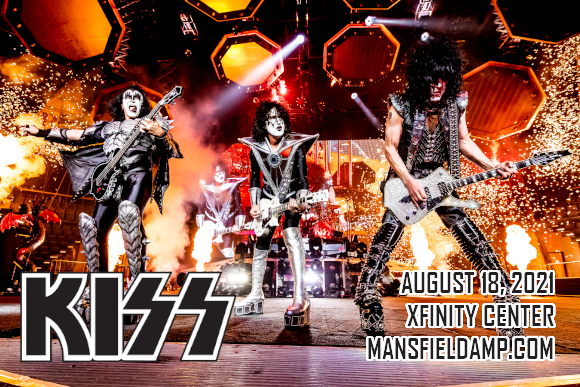 With their idosyncratic sense of style and bombastic, unpredictable stage shows, Kiss are one of the biggest rock bands the world has ever seen. Formed in New York City in 1973, they first made waves in the mid-1970s with their first live album Alive, which served as their mainstream breakthrough. The band's classic line-up is Paul Stanley, Gene Simmons, Peter Criss, and Ace Frehley, but the group has experienced several line-up changes over the years, and for a period in the 1980s, they also went without their signature make-up as their music was introduced to the MTV generation. However, in 1996, the band returned to using stage make-up when the original members re-united. Over the years, Kiss has become one of the world's best-selling bands of all time, with 30 gold and 14 platinum albums, including three that have multi-platinum certification. They were inducted into the Hollywood Walk of Fame in 1999 and the Rock and Roll Hall of Fame in 2014.