Having one of the most jaw-dropping lineups of artists you'll see in one show, the Kiss 108 Concert this year is definitely a must for every music lover. Headlined by The Chainsmokers, Charlie Puth, Ava Max, and Tate McRae, it gives fans all over the country a treat they can't resist. Grab your tickets now and call all your concert buddies for an epic collection of stars in one single stage this June 26, 2022, at Mansfield's Xfinity Center. Rounding the lineup are GAYLE, Lauren Spencer-Smith, and Em Beihold. If these big names don't excite you, then we don't know what will. Click on the "Get Tickets" button to secure your event passes and prepare for one of this summer's best shows. 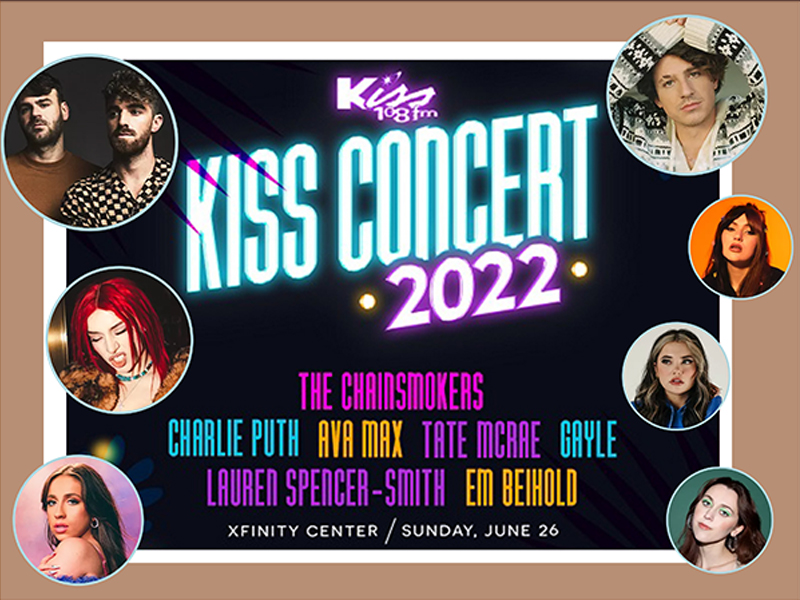 An annual collection of the best pop artists in the industry, Kiss Concert is a summer Boston tradition that fans wait for each year. The one-day music festival is brought by WXKS-FM (107.9 FM), branded as Kiss 108. Owned by iHeartMedia, the FM station is a commercial Top 40/CHR radio station licensed to serve Medford, Massachusetts, and covering Greater Boston.

Every year, it stages one of the most elaborate and star-studded lineups in any festival. This year is no different. The Chainsmokers and Charlie Puth will lead the pack of artists. The Chainsmokers is an American electronic DJ and production duo consisting of Alexander "Alex" Pall and Andrew "Drew" Taggart. The Grammy-award-winning pair is famous for their songs "Closer," "Something Just Like This," "High," and many others. Charlie Puth, on the other hand, is one of this generation's superstars who found success after the viral success of his song videos uploaded to YouTube. With several awards and nominations from the most prominent award-giving bodies, Puth solidified his place in the industry. He is most notable for his songs "One Call Away," "See You Again," "We Don't Talk Anymore," and his recent hit "Light Switch."

Influential female artists Ava Max and Tate McRae also co-headline this year's Kiss Concert. Ava Max is an American singer and songwriter whose song "Sweet but Psycho" propelled her to international stardom and made her win some international awards. Her songs "Kings & Queens" and "My Head & My Heart" are fan favorites that we can expect she'll perform at the concert. Tate McRae, on the other hand, is a Canadian singer and dancer whose top songs include "She's All I Wanna Be," "You Broke Me First," and "Working."

Rounding the lineup are GAYLE, Lauren Spencer-Smith, and Em Beihold. GAYLE is now a household name in music. Thanks to her massive, ubiquitous hit "abcdefu." The Vancouver Island-native singer-songwriter
Lauren Spencer-Smith also hops in the concert to perform her hits "Fingers Crossed" and "Flowers." Completing the epic lineup is the newcomer Em Beihold who will excite concertgoers this summer with her songs "Numb Little Bug," "Groundhog Day," and "City of Angels."

With all these prominent artists coming together for the Kiss Concert, the show will undoubtedly be one for the books. Be sure to secure your tickets now.