We waited one long year to enjoy music in its purest form – live among other fellow fans – and it is finally happening! And what a better way to celebrate than alongside the Kings themselves – Kings of Leon are touring again! After countless evenings driving and screaming to Use Somebody in your car, you can now share the experience with 20,000 other fans under the lights of the iconic Xfinity center, and the beats of the Followill boys themselves.

Kings of Leon are set to launch a North American tour this summer in support of their most recent album, When You See Yourself. Released in March, the album is described as "signature Kings", and although mixed opinions may be seen online, the most renown critics out there claim it to be a huge success. And frankly, we can only imagine what the rippling guitar leads of "Bandit" would sound when cascading across an arena full of rock fans. Get your tickets today because after an undesired break, the live music world is on fire, and we can now finally join it. Click the link bellow and secure your tickets for Kings of Leon supported by Cold War Kids on the 27th of August at Xfinity Center. 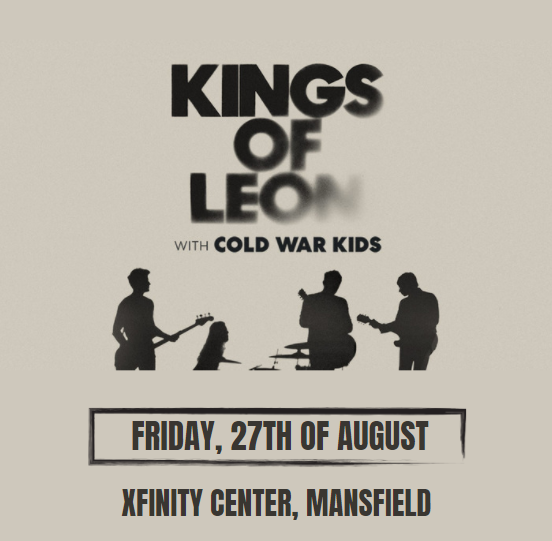 After five long years, one of America's favorite alternative rock bands has released a new album, and are getting ready for a tour of a lifetime! When You See Yourself is the first album released in the form of a non-fungible token, which offers unique perks along with the unparalleled music we all know King of Leon can deliver. Bringing us the fresh sounds from their March release alongside classics such as Sex is on Fire and use somebody, the 26-show trek will kick off August 3rd at the iTHINK Financial Amphitheatre in West Palm Beach, Florida, and wrap October 3rd at the Sunlight Supply Amphitheater in Ridgefield, Washington.

Xfinity Center, Mansfield, Massachusetts is high on the tour list with a show set to take place on August 27th 2021. The iconic 80's outdoor amphitheater was named Top Grossing Amphitheater in 2021 by Billboard, and has hosted legendary bands such as Aerosmith, Depeche Mode, Pearl Jam, The Eagles, and many more. You are guaranteed to sing Use Somebody alongside another 20,000 Kings of Leon fans under the stars, enjoying the gourmet hot dogs, sausages, and Loaded Tater Tots, signature cocktails and classic Philly Cheesesteaks – yes, Xfinity Center sure is a food and beverage experience among everything else.

Get your ticket today for a night guaranteed to be one to remember. Follow the link below.