“American Bad Ass” Kid Rock has gathered the redneck rebels of country music for his Red Blooded Rock N Roll Redneck Extravaganza tour, bringing “The Ones That Like Me” singer Brantley Gilbert and country comedian Wheeler Walker Jr. with him to Xfinity Center on Saturday 29th September 2018 for a night of raucous mayhem! Don’t miss your chance to see these modern-day outlaws in action as they raise the roof and bring the house down! 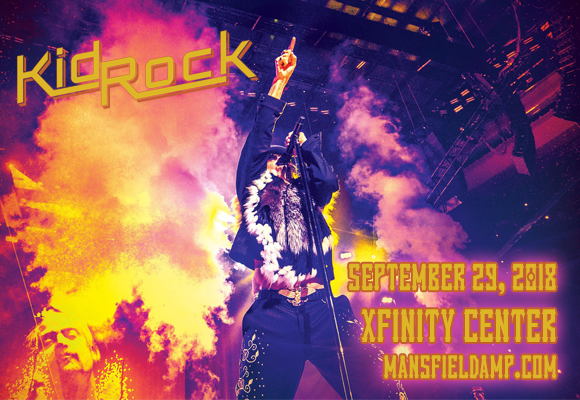 Beginning his career in the 1980s as a member of hip hop group The Beast Crew, Kid Rock is an American singer-songwriter, rapper, musician, record producer and actor. In 1988, after releasing a string of demos with Insane Clown Posse producer Mike E. Clark, Rock was offered recording contracts with six major labels, eventually signing with Jive Records that year, releasing his debut studio album Grits Sandwiches for Breakfast a few months later. Rock released several successful hip hop albums in the coming years, but it was 1998’s Devil Without a Cause that really put him on the map, with a blend of rap, country and heavy metal that became his signature. The album was eventually certified eleven-times platinum by the RIAA, and was influential, with its single “Cowboy” considered by AXS to be the first in the country rap genre. Having enjoyed a four-album sojourn into a more traditional country format, with sung lyrics instead of rap, Rock’s most recent album, 2017’s Sweet Southern Sugar, was a return to hip hop for the artist.