“Good Old Days” collaborators Kesha and Macklemore have teamed up for an adventure this summer, bringing The Adventures of Kesha and Macklemore Tour to Xfinity Center on Tuesday 24th July, 2018! The maverick pop princess will be performing tracks from her number one, double-platinum album Rainbow, while high-octane rapper Macklemore will be performing from his 2017 release, Gemini! Get ready to let the good times roll! 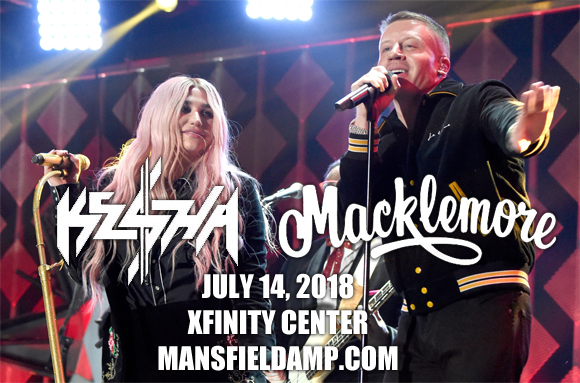 First coming to public attention in 2009 as a featured artist on Flo Rida’s number-one single “Right Round”, American singer, songwriter and rapper Kesha has sold over 33 million records in the United States and 60 million records worldwide to date. Animal, her debut album, was released in 2010, going straight to number one in several countries and winning her the MTV Europe Music Award for Best New Act in 2010. She is best known for her top ten singles “Tik Tok” (which was, at one point, the best-selling digital single in history, with over 14 million units sold internationally), “We R Who We R”, “Timber” and “Die Young”. Kesha returned from a musical hiatus in 2017 to release her third studio album, Rainbow.