The classic islander style singer/songwriter Jimmy Buffett is returning to the road this coming summer and will be bringing his well loved hit songs to the live venues across North America! You can catch him as he graces the stage at Xfinity Center on Saturday 14th August 2021! Tickets are now available to book – parrotheads don't miss this! 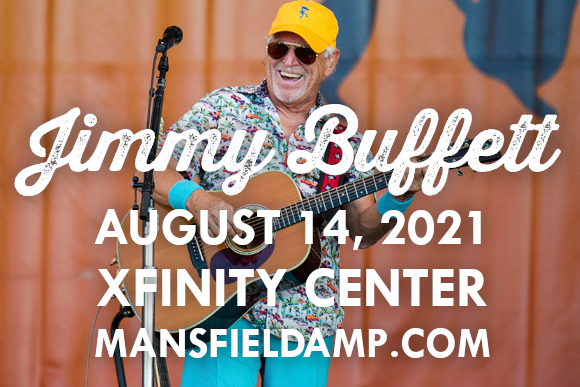 As Jimmy Buffett has always set out to spread positivity and relaxed vibes through his music, his fan base has become international and people just can't get enough of his music. Jimmy Buffett has provided us with a long list of single and album releases throughout the decades from his debut album all the way back in 1970 to his most recent creations.

His unique and instantly recognizable 'island style' sound has transformed the music scene, particuarly with live audiences and his adoring parrotheads travel from all corners of the earth to be a part of his shows. With his band the Coral Reefer, Jimmy Buffett has released chart topping hits from "Margaritaville" which became the biggest song of the century. As well as other successful songs such as; "Come Monday" and It's Five O'clock Somewhere."

As he embarked on his path of making and performing music, Jimmy Buffett started in Nashville Tennessee during the 1960's with his country roots sound and progressed towards a more folk rock approach before settling on his upbeat "Beach Bum" look and musical style. Jimmy Buffett therefore has created a real party atmosphere for his live performances, taking his fans on a journey and providing them with a summery vacation setting for each and every crowd experience.

If you love Jimmy Buffett then be sure to be a part of his exclusive 2021 tour, there will be plenty of opportunities to sing a long to all of your favorite Jimmy Buffett tracks!

"The interactivity with the songs is what makes a Jimmy Buffett concert so fun. It’s hard not to get swept into singing along to songs and chanting out, Salt, Salt, Salt after Jimmy sings that popular line, “Searchin’ for my long-lost shaker of salt”, from the song “Margaritaville”. Or putting your hands together up over your head as you bring your fins to the left, fins to the right, as the crowd all became dancing sharks for the song “Fins”. Along with so many other hit songs like, “Volcano”, “Son of a Sailor”, “One Particular Harbor”, “Cheeseburger In Paradise”, I could go on and on, there was absolutely no shortage of crowd favorites."