Heavy metal giants Iron Maiden bring the Legacy of the Beast Tour to Xfinity Center on Thursday 1st August 2019! The megalithic band will be bringing with them an utterly jaw-dropping stage experience that brings their iconic music to life in a truly explosive way! The stage show takes fans on an immersive voyage through the music of Maiden, which has to be seen to be believed!

“I’ve had the time of my life playing with all these magnificent props on stage, it’s been fantastic, we can’t wait to bring this show to you!” – Bruce Dickinson 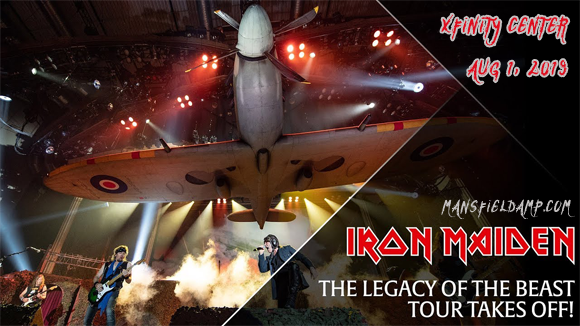 Pioneers of the new wave of British heavy metal and one of the most renowned and successful heavy metal bands of all time, English heavy metal band Iron Maiden was formed in East London, England in 1975. The group has sold over 100 million copies of their albums worldwide and they have played over 2000 live shows to date. Iron Maiden's line-up currently consists of band leader, primary songwriter and bassist Steve Harris, guitarist Dave Murray, guitarist and backing vocalist Adrian Smith, lead vocalist Bruce Dickinson, drummer Nicko McBrain and guitarist Janick Gers. Throughout their most successful period, the band released several gold and platinum certified albums, including: The Number of the Beast (1982), Piece of Mind (1983), Powerslave (1984), Live After Death (1985), Somewhere in Time (1986) and Seventh Son of a Seventh Son (1988). They were honoured with the Ivor Novello Award for international achievement in 2002.