The magnificent and highly influential Hall and Oates are bringing their tour of hits to Xfinity Center on Thursday 5th August 2021! The iconic pair continue to make waves in the world of music and their live tours show them to be as talented and captivating as they ever were! Catch these incredible performers playing a whole host of hits, including their huge number ones "Rich Girl", "Kiss on My List", "Private Eyes", "I Can't Go for That (No Can Do)", "Maneater", and "Out of Touch"! Fans will also be lucky enough to enjoy support sets from KT Tunstall & Squeeze! 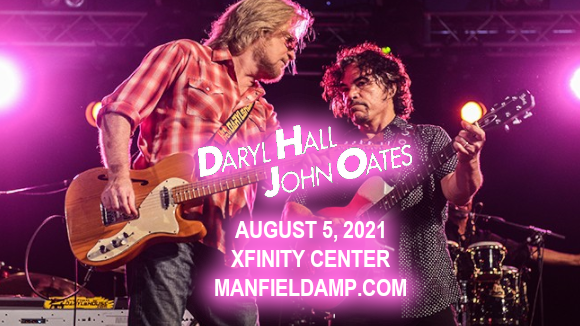 The best-selling duo of all-time, Hall and Oates are a genre-beding phenomenon whose unique approach to catchy, danceable songs has made their music timeless. The twosome, who have sold over 40 million albums worldwide, met at university in Philadelphia and drew from their love of soul music, pop, rock and new wave, to create a singular sound that brought them worldwide fame and chart success. Over the years, they had 34 hit singles on the Billboard Hot 100, including six number ones. Of their albums, seven have been certified platinum by the RIAA, and six of them gold. Their legacy has been honored with inducution into the Songwriters Hall of Fame, the Rock and Roll Hall of Fame, and with a star on the Hollywood Walk of Fame.