If you want a hard hitting summer tour, Xfinity Center has something that might scratch that itch… Heavy metal renegades Five Finger Death Punch and Breaking Benjamin are teaming up for a powerful co-headlining tour, and it won’t be quiet…

”When I’m asked for a tour quote I’m always scratching my head… Is there anything to add?” says Five Finger Death Punch guitarist Zoltan Bathory. “We are putting together 2018’s biggest hard rock tour of the summer; where even the first band on the bill has a massive hit single around the world. There will be fire, there will be lights and it’s going to be loud. An experience you can’t just download, you have to be there. We all get about eighty summers in our lifetimes, so make them count.” 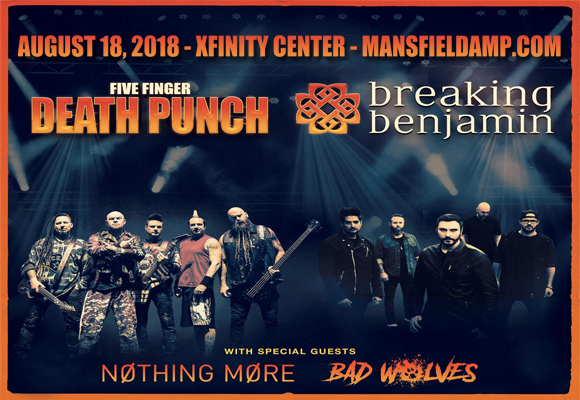 Formed in 2005, in Las Vagas, Nevada, Five Finger Death Punch are an American heavy metal band. The following year, on the strength of their self-produced debut album The Way of the Fist, the band was signed to Firm Music, who released the album in 2007 to critical and commercial success. To date, the band has released three albums that have been certified gold by the RIAA and three that have been certified platinum, making them one of the most successful bands of the decade. Their seventh studio album, And Justice For None, is slated for release in May 2018.