Everybody's favorites – Dave Matthews Band have announced their exciting 2021 dates to the world! As they return to the stage on their summer tour, they will be heading on down to Xfinity Center on Friday 20th August 2021 (Rescheduled from Friday 16th July 2021)! Here's your chance to catch Dave Matthews Band doing what they do best, performing in concert! Don't miss out on one of the best live experiences around – book your tickets now! 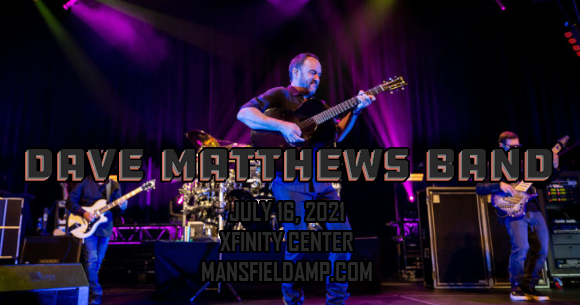 The amazing Dave Matthews Band have transformed the music scene with their groundbreaking songs that have truly taken American music to another level. With their talented band of Dave Matthews on vocals and guitar, Stefan Lessard on Bass, Carter Beauford on drums and adding members along the way, Dave Matthews Band or DMB first took over the charts with their 1994 release of their debut album. Since then they have captivated audiences around the world and given a range of unforgettable performances that their fans know and love them for, right up until today.

With more than one million concert tickets sold for their outstanding tours, Dave Matthews Band are one of the most popular around to catch whenever they hit the road. As their dedicated fans will know, Dave Matthews Band always give a unique experience at their live shows as not one of them is the same as the other, this ability to improvise and craft a way of keeping things interesting has pushed them further in their career and has become a part of their style throughout the decades, making their music career ever lasting as you never know what to expect next from Dave Matthews Band!

Their huge collection of studio albums has proven their superstar quality in songwriting and has brought to light a long standing stream of single releases. From their first of Under the Table and Dreaming, which instantly became an international hit, to producing another seven impressive records from Crash (1996), Before These Crowded Streets (1998), Everyday (2001), Busted Stuff (2002), Stand Up (2005), Big Whiskey & the GrooGrux King (2009), Away from the World (2012) and their most recent of Come Tomorrow (2018).

As one of the most hard working groups around, Dave Matthews Band always provide an uplifting and energetic concert for the listener as they grace the stages with some of their biggest hits. Join them as they embark once again in 2021 across North America!