One of the biggest breakout acts that country has seen over these last few years, Chris Stapleton, is heading to Xfinity Center on Friday 14th July 2017 as part of his All-American Road Show! Stapleton has curated the tour to feature some of the hottest rising stars in country, and will be joined for this show by the incredible Anderson East & Brett Cobb! Stapleton will also be using this tour to promote his much anticipated sophomore album – a follow-up to his platinum-selling, Grammy Award-winning debut, Traveller – so expect new material from this phenomenal artist! 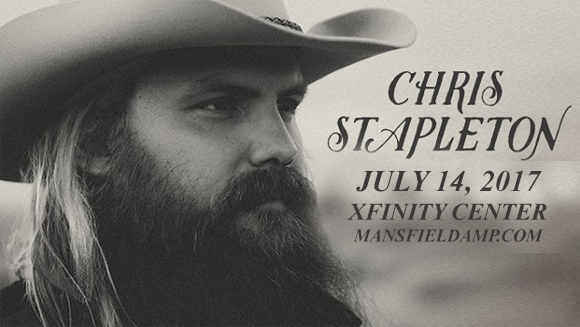 Country and bluegrass singer Chris Stapleton began his music career as a songwriter in Nashville, writing for Adele, Luke Bryan, Tim McGraw, Brad Paisley, Darius Rucker, Kenny Chesney, George Strait, Dierks Bentley an many more. Stapleton then went on to front Grammy Award-nominated bluegrass band The SteelDrivers from 2008-2010 and, after leaving the band, signed as a solo artist to Mercury Nashville in 2013. His debut solo album, Traveller, was released in 2015, earning Stapleton a slew of awards and nominations. He won three awards at the 2015 CMA Awards: “Album of the Year”, “Male Vocalist of the Year”, and “New Artist of the Year”, as well as the CMT Artist of the Year Breakout Award. The following year, Stapleton received four Grammy Award nominations, including Album of the Year, taking home two: Best Country Album and Best Country Solo Performance.