Alt-rock fans, are you hyped for Breaking Benjamin?? They’re back with their massive new album, “Ember,” and a huge accompanying tour around the United States with none othe than Three Days Grace!! They’re headed to the Xfinity Center on Sunday 25th August 2019 – whatever you do, don’t miss it!! Tickets are on sale now and likely to vanish quickly – get yours while you can!! 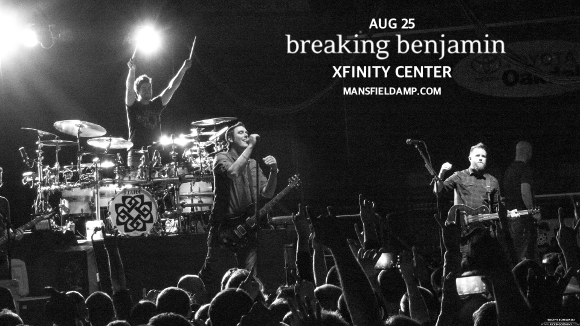 While over the years it has often seemed as if Breaking Benjamin were less of a band and more of a group of musicians surrounding founder Benjamin Burnley, that’s all changed now. The current lineup, consisting of Aaron Bruch, Shaun Foist, Jasen Rauch, Keith Wallen in addition to Burnley, has given the band all-new life, with the other band members all contributing significantly to the band’s material – much to the relief of their singer.

“People thought I wanted to run the show and be the primary writer, but that was never the case,” the singer explained in an interview. “If I did most of the writing on our first records, it was because I wasn’t getting a whole lot from other people I was interested in. That’s all changed now. These guys are amazing players, they’re strong vocalists and they can really write. Now I can concentrate more on playing guitar and singing, so it’s a lot more fun.”

Are you ready to see the latest and greatest incarnation of Breaking Benjamin live?? Fans are hyped – make sure you get your tickets fast, because they’re not going to last!!