Multi-award-winning country hero Brad Paisley is back on the road for his fifth headlining stint, proving then when it comes to live country shows, there are few who do it better! Coming to Xfinity Center on Saturday 11th August, 2018, Paisley will also be bringing along special guest Dan Tyminski as support on his Weekend Warrior Tour! Paisley’s show can also be included as part of the Country Megaticket bundle, giving fans the opportunity to see him alongside a multitude of amazing country artists this summer, for the price of one season ticket! 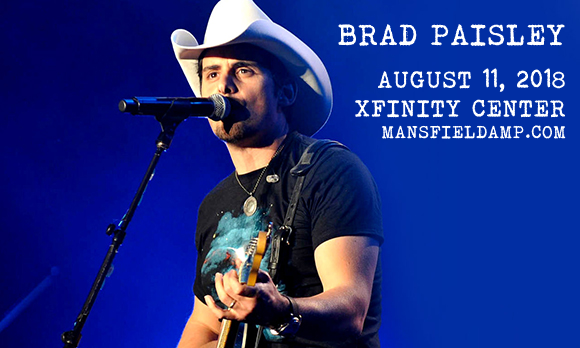 One of country music’s most successful artists, Brad Paisley is an American artist whose career began with the release of his 1999 debut album Who Needs Pictures. By 2001, Paisley had been inducted as the youngest ever member of the Grand Ole Oprey, establishing himself as one of the genre’s hottest new acts. To date, Paisley has charted thirty two top ten singles on the Billboard Hot Country Songs chart, including eighteen number ones, and he holds the record for the most consecutive number one singles in the chart’s history (ten). Paisley has sold over twelve million albums and has recorded ten studio albums to date, as well as a Christmas album, with each receiving gold status or above from the RIAA. A highly awarded artist, throughout his career Paisley has received three Grammy Awards, fourteen Academy of Country Music Awards, fourteen Country Music Association Awards, and two American Music Awards.