The world's best-selling boy band of all time, Backstreet Boys, will be bringing their extended DNA Tour to Xfinity Center on Wednesday 20th July 2022 (Rescheduled from Wednesday 7th July 2021)! Expect a night full of everything you love about the group – catchy, danceable pop hits, expertly synchronized choreography, sex appeal, insane stage production, and a healthy dose of nostalgia thrown in! Whether you want to relive the glory days of the 1990s or you're mad about their later work, there's something for every fan in this high-energy show! 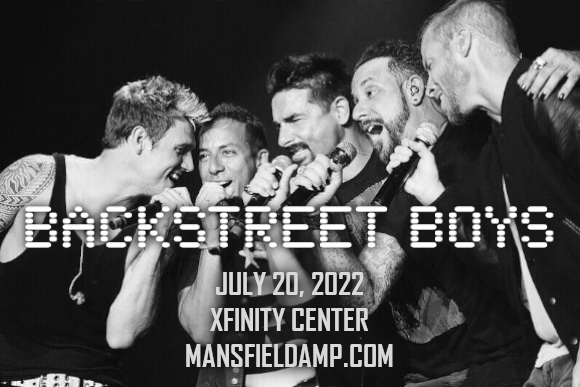 During the 1990s and 2000s, everyone knew who the Backstreet Boys were – the pop group, formed of AJ McLean, Howie Dorough, Nick Carter, Kevin Richardson, and Brian Littrell, was everywhere. Formed in 1993, the group made it as teen stars with their 1997 self-titled US debut, which peaked at number four on the Billboard 200 and has since been certified 14-times platinum. The Backstreet Boys are now the best-selling boy band of all time, and one of the world's best-selling music artists, having sold over 100 million records worldwide. They were the first band since Led Zeppelin to have their frist 10 albums all reach the top 10 on the Billboard 200, and the only boy band. Having spent several years in the limelight, the group embarked upon a two-year hiatus in 2003, returning in 2005 with Never Gone. In 2007, Richardson decided to leave the band to pursue personal projects, but in 2012 he rejoined the group permanently. The band celebrated its 20th anniversary the following year, and later in 2013 received a star on the Hollywood Walk of Fame. Backstreet Boys' 10th and most recent album, DNA, was released in 2019.