Alanis Morissette celebrates the 25th anniversary of her highly influencial album Jagged Little Pill this year! The Canadian singer songwriter comes to Xfinity Center on Saturday 4th September 2021 to perform some of the iconic singles from the album, including her world-famous smash hit "Ironic", as well as tracks from her brand new ninth studio album Such Pretty Forks in the Road! Not only that, but she'll be joined by fellow '90s hit-makers Garbage and Liz Phair as her special guest support acts! 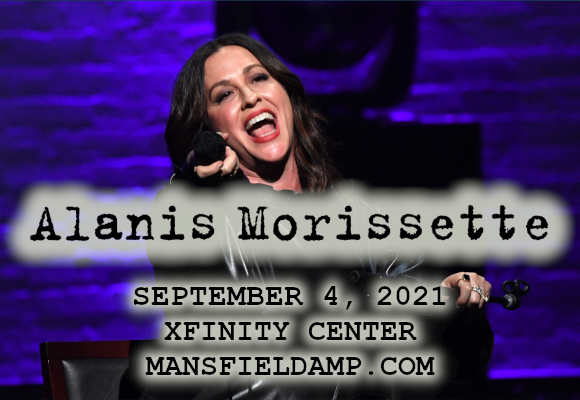 Canadian singer songwriter Alanis Morissette skyrocketed to fame in 1995 with the release of her global smash hit third album Jagged Little Pill. The album stayed in the top 20 on the Billboard 200 albums chart for over a year and sold more than 16 million copies in the U.S., as well as total of 33 million worldwide, becoming the second biggest-selling album of all time by a female artist. It also launched six hit singles: "You Oughta Know", "Hand in My Pocket", "Ironic", "You Learn", "Head over Feet" and "All I Really Want". Jagged Little Pill was certified 16-times platinum in the US, making Morissette the youngest artist at the time to be certified diamond in the US. It also won Morissette the awards for Best Female Rock Vocal Performance, Best Rock Song (both for "You Oughta Know"), Best Rock Album and Album of the Year at the 1996 Grammy Awards, from nine nominations. To date, Morissette has won a total of seven Grammy Awards and 12 Juno Awards to date, and she has sold over 75 million records worldwide. Such Pretty Forks in the Road, her ninth studio album, will be released in 2020.