30 Seconds To Mars are heading out on tour this summer in support of their hotly anticipated upcoming album Monolith, so fans can expect fresh and exciting new material when they perform at Xfinity Center on Sunday 10th June 2018, as well as all the fan favorites! The epic rock trio will be joined in support for the stint by “Anna Sun” pop-rock ensemble Walk the Moon and New York-based indie up-and-comers MisterWives! 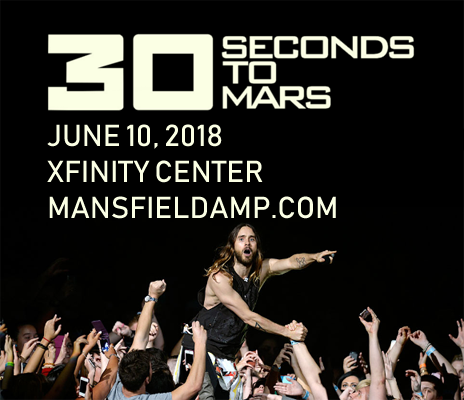 30 Seconds to Mars is an American rock band formed by Jared Leto (lead vocals, guitar, bass, keyboards), Shannon Leto (drums, percussion) and Tomo Miličević(lead guitar, bass, violin, keyboards, other instruments) in Los Angeles, California in 1998. The band’s self-titled debut album was released in 2002 to positive reviews and slow success (it eventually sold two million copies worldwide, as of 2011), but it was their second studio album, 2005’s A Beautiful Lie, that brought the band mainstream success. This Is War (2009) marked a musical evolution for the band into a more experimental, progressive sound, and the making of the album was the subject of Artifact (2012), an award-winning documentary film produced and directed by Jared Leto. To date, the band has sold fifteen million albums worldwide.